In the last decade, lignocelluloses have drawn the scientific community’s attention as a rich resource for 2G ethanol production and other by-products. This is highly important because of many reasons. It mainly include climate change concerns. Also the risks of interruptions in food supply chains in various parts of the world are becoming more urgent. In this circular economy, lignin valorization in biorefineries serve as the highly suitable industrial platform to develop the essential chemical changes.

Biorefineries are defined by the IEA as the sustainable processing of residual biomass into a wide range of bio-based products. It mainly includes food, feed, materials, chemicals etc and bioenergy like fuels, power, heat etc. Furthermore, the main goal of the biorefineries are the complete valorization of stubble. Thereby lowering the environmental pollution through an alternative energy or materials and to achieve less dependency on fossil-based fuels and materials.
Regarding the lignocellulosic biorefineries, there are still important limitations that still make them non-cost-competitive.

Definition of Lignin and its features

Lignin is the complex chemical compound most derived from biomass. It is a set of non-sugar molecules acting like glue to hold the fibres. It is a chemical bond of carbohydrate materials, occurs throughout the cell wall, and fills the spaces in it. Lignin is the main component of lignocellulosic biomass, making up about 15-30% of its weight. The three main monomers consists of almost all lignin found in nature are:

The lignin adds compressive strength and hardness to the cell wall of plants and have a major role in the evolution of greens by suporting them to withstand the gravitational force. It also waterproofs the plant’s cell wall, supporting the upward movement of water in xylem tissues. Lastly, lignin has antifungal properties and often rapidly deposits in response to fungal infection, protecting the plants from the diffusion of toxic fungal enzymes.

Lignin is removed from wood pulp in manufacturing paper. It is mainly by treatment with chemical agents such as sulfur dioxide, sodium sulfide, or Sodium hydroxide.

Particleboard and similar laminated or composite wood products contain lignin as a binding agent, as a soil conditioner, as a filler or as an active ingredient of phenolic resins, and as a linoleum adhesive. Vanillin (synthetic vanilla) and dimethyl sulfoxide are also made from lignin.

The main properties of lignin include:

Lignin is the second rich biopolymer in stubble, with high potential as a source of many aromatic chemicals and compounds required for construction. Over-exploitation of lignin can raise the profitability of many lignocellulosic biorefineries and the production of biobased products that can contribute to reducing greenhouse gas emissions from those of equivalent fossil fuel-based processes. However, one of the main obstacles to the full exploitation of biobased materials is the complex structural variation of isolated lignins due to the natural variability of biomass feedstocks and the differences in biorefinery layouts: The distribution of molecular weights, the distribution of available groups, and the residual impurities are all affected.

Large volume and low specific value applications of lignin include producing energy and biofuels. In contrast, small-volume and higher value-added applications include the production of chemicals through lignin depolymerization and specific functionalization.

While the most common lignin from the pulp paper industry currently accounts for 170 tons/year, additional important current lignin include lignosulfonates, alkali lignin, acid hydrolysis lignin, steam explosion lignin and organosolve lignin. The development of novel pretreatment technologies at the industrial scale, such as steam-assisted pretreatment or solvent-assisted biomass fractionation, has led to novel lignins from novel feedstocks with characteristics suitable for more targeted potential applications. 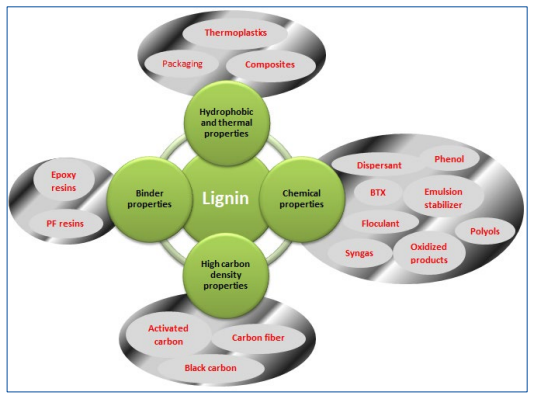 The current review consists of the analysis of the available technical lignin with a special focus on lignins stemming from new technologies and producers, including market volumes at the global level. At the European level, many projects have been funded in the last ten years for the conversion of lignins to final products.

There are many challenges facing biorefineries, including novel and sustainable approaches to lignocellulose fractionation, treatment, transformation, and commercialization of the final products, as well as resolving a number of constraints that affect lignin treatment/transformation. This blog highlights the main restraints for industrial lignin valorization in light of its abundance as stubble and the sustability of lignin valolrization and its potential applications in different industries. In addition, lignin depolymerization propose a flexible and potentially resilient platform under instabilities in the market. Furthermore, Khaitan is implementing the essential technological tools to accelerate scientific breakthroughs in lignin research and the development of lignin for use as a source of fuels and materials in the future